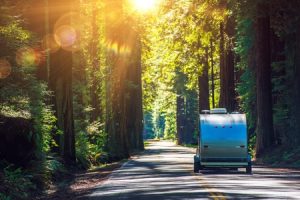 Amidst the “tiny house” craze and a Millennial travel obsession, RV manufacturers seem to be catching onto a notable trend: smaller is better, especially if it’s mobile. Over the past few months, many American motorhome manufactures have been rolling out pint-sized additions to their inventory, taking RV design back to a time when towable trailers were all the rage.

Take the Basecamp, for example—a $35,000 road-tripping pod recently introduced by Airstream Inc., a subsidiary of RV giant Thor Industries Inc., which is outfitted with Italian cabinetry, a Bluetooth speaker system and panoramic window to take in those sweeping views. The aerodynamic line can even be towed behind a Subaru. “It’s really kind of an online phenomenon,” said Bob Martin, chief executive of Thor Industries in an interview with Bloomberg Pursuits. “Our social media hits have been incredible.”

In the age of Instagram and Snapchat, that idea shouldn’t come as much of a surprise. Travel has now become the cottage industry for social media companies, and this new generation of RVs is simply the latest development at the forefront of this phenomenon. By the end of last year, Americans were projected to buy nearly 420,000 motor homes—a number even greater than in the RV craze of the mid-1970s. As for 2017? Sales are expected to increase by another 4.4 percent, according to the Recreation Vehicle Industry Association (RVIA).

Winnebago Industries Inc. is another company getting on board with the “less is more” mantra. Two years ago the company purchased Grand Design RV, which makes a line of small affordable rigs, thereby solidifying their embrace of minimalist products. Products like the Winnie Drop, a compact camping trailer practically designed with coziness in mind. The space resembles a mini-cottage, and features a bed, bathroom and small kitchen.

A few factors seem to be driving the craze above the rest: low unemployment rates, cheap financing, and historically low gas prices. Throw in the fact that roughly 7 percent of American drivers are cruising around in “fairly new” pick-up trucks, and voilà—the perfect combination results. “We thought it would be a good year,” said Kevin Broom, an RVIA spokesman in a recent interview. “We just didn’t expect it to be this good.”