The most exotic on our list of domestic road trips to see the best of what America has to offer, Hawaii is as foreign a land you can experience without a passport. An archipelago of 8 islands, none of which are connected by roadway, Hawaii is a relatively young collection of land masses. With the oldest island having formed 81 million years ago, the youngest of the islands surfaced from the ocean about 5 million years ago.

Entirely a product of volcanic activity, the Hawaiian landscape is rocky, diverse and mountainous. Combined with its humid climate and frequent rains, it also makes for a very water-rich environment. Full of rivers and waterfalls adding to the exotic nature of the surroundings, Hawaii is a great place to hike and cool off in the pristine, clear waters throughout. But not all of the islands enjoy paved roads. So as far as picking an island, renting an RV and heading out, O’ahu is the best bang for your buck. 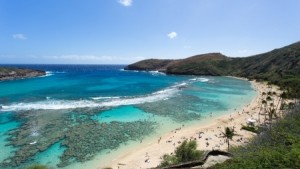 Packed with as much sea life as you could experience in a single place, the Hanauma is probably the most famous bay you’ve never heard of. That’s because, thanks to its stunning surroundings and interchangeable beauty, is has served as the backdrop to a countless number of Hollywood films. Actually a former volcanic vent now below the ocean surface, the Hanauma waters are so clear you can see straight to the bottom in even the vastest of its depths. The fact it is also a nature preserve and marine life conservation colony also makes for quite the unique experience. 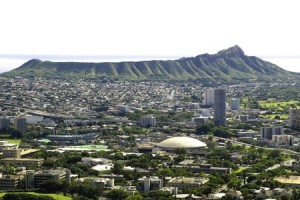 Not unlike the Hanauma, Diamond Head is a dormant volcano which forms a tuff cone. But unlike the Hanauma, Diamond Head is 762 feet above sea level and over 500 feet above Honolulu. And with less than a mile hike to the crater’s edge, it’s an easy walk for even the most novice of hikers. But it could possibly be the most diversified .75 mile hike of your life, over loose rock, up about 150 manmade stairs and through a well-lit tunnel, it’s an interesting trek to the top. And once you reach the rim, the 360-degree views are spectacular, spanning for miles and certainly clear over the island of O’ahu. 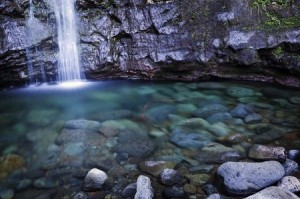 The perfect ending to a day of hiking and exploring the island of O’ahu is found cradled in the depths of lush paradise. Actually a very quick hike from H-3 Highway on the windward side of the island, Manoa Falls well worth the minimal effort. Moreover, it’s 55-foot cascade is into the crystal clear swimming pool below offers an unmatched experience less than most have personally experienced. Just be careful to swim more with your arms than your legs to avoid cutting your feet and legs on the volcanic rocks below the surface water.