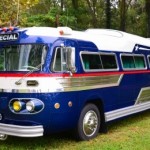 Vintage in is right now. It’s in for everything from living room décor to kitchen fixtures and appliances to automobiles. Vintage automobiles are a little harder to come by and aren’t as reliable as they are these days. But this doesn’t mean you can’t put a vintage spin on your new vehicle, specifically your RV.

You can actually trace the roots of the camper, or recreational vehicle, to the pioneer days as covered wagons. Originally the vehicle built to allow explorers and settlers embark on the interior of the country, wagons have evolved into RVs and a symbol of American freedom. These ‘living quarters on wheels’ now let American travelers traverse the continent they helped settle in the 17-1800’s.

The heyday for the RV- not unlike that of the traditional passenger car- stretched throughout the twentieth century, when automobiles of all kinds had unique and cutting edge style. Brushed steel accents with curves and lavish ornamentation spoke to a much more impressionable consumer population.

The population was once aglow with the almost seductive lines and styling of midcentury Detroit. As each decade passed, what was known as the automobile would morph and transform into something with larger fins and rounder- yet more balanced- panels and side scoops. Until one day in the mid-seventies, they didn’t.

Weather it was the oil crisis, America’s first wartime defeat or just the plain death of automotive engineering imagination, the car as a piece of artwork had died. Curves and fins became straight lines and tacked-on faux-functioning decal. What was once cherry red, baby blue and shiny chrome became drab brown, black and conservative navy blue. What was once a canvas to wow the American motorist was now nothing more than a utility to transport from point-a to point-b and stowed away in the garage, forgotten about until the next dutiful excursion.

By the 1980’s, the safe card in the automotive industry was routine and tired. It was obvious the signature stamp from such American flagships and Cadillac, the Ford Mustang and the Lincoln Continental were a thing of the past. Even the Corvette was bland and unremarkable by 1984. And it wasn’t much different for the RV. The RV, once a loud exclamation to the freedom of the road, became a bland and boxy utility. Styling had been all but lost on highways and byways throughout the nation.

Reincarnating these days when motorists took pride in their campers is a trend on the move. Thankfully modern camper and RV design has moved away from the tasteless oranges and browns of the late twentieth century and signature styling made a strong comeback. But bringing back the retro look and feel of the 40’s, 50’s and 60’s to your RV is the perfect way to add your own signature look. With subtleties and vintage accessories, such as awning rails, aluminum siding and mill finished accents, mobile home owners can add their own touch. Even adding your own, stylized cursive emblems lend that finishing touch so much design is lacking nowadays.